There are several complications that could, but hopefully will not, occur in your pregnancy. Below is a list of the most common pregnancy complications.

Countless aches, pains, and other physical changes occur during pregnancy. Most of the time, they are no more than signs of normal pregnancy.

Some of the more common complications, adapted from the websites listed at the bottom of this page, in pregnancy include:

Gestational diabetes is a form of diabetes in which the body does not produce adequate amounts of insulin to deal with sugar during pregnancy. Between 2-7% of expectant mothers develop this condition, making it one of the most common health problems of pregnancy.  Most women with gestational diabetes do not remain diabetic once the baby is born.

A woman is diagnosed with preeclampsia if she has high blood pressure and protein in her urine after 20 weeks of pregnancy.  Preeclampsia causes the blood vessels to constrict, resulting in high blood pressure and a reduced blood flow that can affect organs throughout the body.  When preeclampsia is severe it can affect many organs and cause serious or even life-threatening problems. That is why you may need to deliver early if your condition is severe or getting worse. The only way to get better is to deliver the baby.  Preeclampsia most commonly shows up after 37 weeks, but it can develop at any time during the second half of pregnancy including during labor or even after delivery.  Preeclampsia affects 3-8% of pregnant women.

Premature or preterm labor is when a woman goes into labor before week 37 of pregnancy.  Any woman can have pre-term labor but some women have a higher risk. Problems with the uterus or placenta and a history of pre-term birth with another pregnancy increase the risk of preterm labor. Dehydration also boosts the chances of pre-term labor. About 12% of babies in the U. S. are born prematurely. This number has gone up over the years, partly because more women are pregnant with twins or higher order multiples, who tend to arrive early.

A problem arises when the mother is Rh negative, and her child is born Rh positive, and  the mother's body starts to build antibodies up against the next Rh positive baby. The best way to avoid problem is for the mother to be tested at the beginning of the pregnancy. The birth mother than can be given medication to help prevent the build-up of antibodies and thus prevent later problems.

Group B streptococcus (GBS) is one of the leading causes of infections in newborns. This is a type of bacterial infection that can be found in the vagina and/or lower intestine of up to 40% of all healthy, adult women. A mother can pass GBS to her baby during delivery.  GBS is responsible for affecting about 1 in every 2,000 babies in the United States. Not every baby who is born to a mother who tests positive for GBS will become ill.

Weight at birth is a good indicator not only of a mother's health and nutritional status but also the newborn's chances for survival, growth, long-term health.  Babies who are born at a low birth rate run the risk of respiratory infections, blindness, learning disabilities, cerebral palsy, and heart infections. In the industrialized world, cigarette smoking during pregnancy is the leading cause of low birthweight. Other common causes include poor nutrition and substance use.

Toxoplasmosis is a disease caused by a single-celled parasite. More than 60 million people in the U.S. may be infected with the Toxoplasma parasite.  A person can get this parasite by touching anything that has come into contact with cat feces, like the litter in a cat litter box. Eating contaminated raw or partly cooked meat, especially pork, lamb, or venison, touching your hands to your mouth after handling undercooked meat, and drinking water contaminated with toxoplasma are other ways to become infected.  Of those who are infected, very few have symptoms because a healthy person's immune system usually keeps the parasite from causing illness. However, pregnant women should be cautious since a Toxoplasma infection could cause serious health problems.

Help For Pregnant Women and Birth Mothers By State

Our Adoption Agency is licensed in multiple states and is able to help a birth mother and birth father in all 50 states and in foreign countries. We are different from county child adoption programs and have worked with birth parents from all over the world and our overall satisfaction rating by birth parents has been excellent. 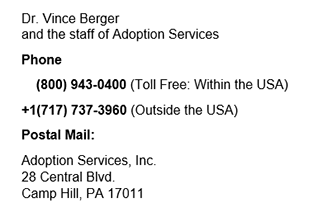